Another 1:1 Scale Project. This time a Lange Messer.

It's been a long time since I last tried my hand at any kind of smithing, but I've always wanted to have a go at making my own sword so I sourced some high tensile steel & got stuck in. There's still a way to go but here is a quick look at progress so far. 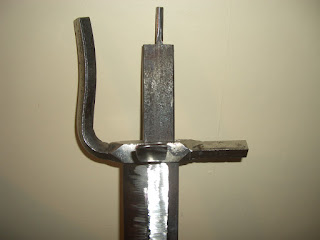 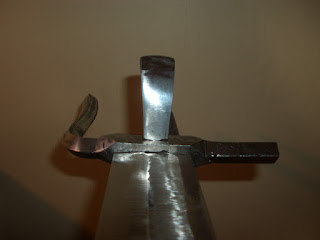 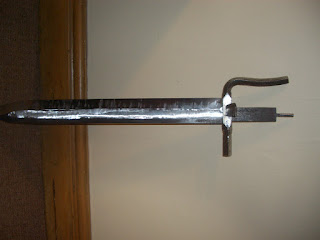 The hilt elements are all hand forged & the blade a mixture of forging & stock removal i.e grinding. There's still quite a bit of work to do & I'm not 100% happy with the proportions of the hilt but so far its been an interesting project. More on this soon.

Posted by Handgrenadealien at 08:40 5 comments:

Having actually played a second game of Chain of Command and enjoyed it I decided to spend some  hard earned cash & add some extra support elements for my Diggers to call upon.

First up a Renault R35 freshly liberated from its former masters: 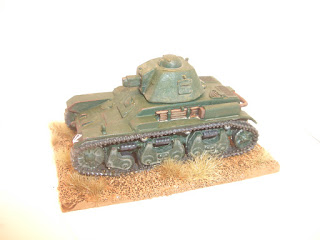 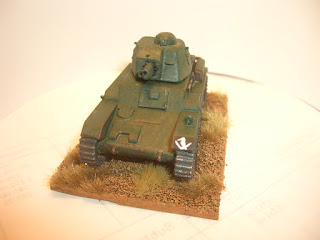 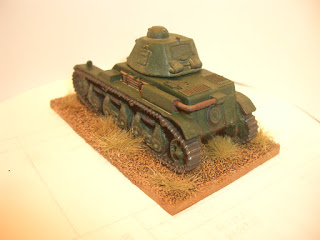 I was going to attempt a snazzy camp pattern but  the sources I've found indicate that the captured R35's were in plain dark green livery. I have Aussified it with the addition of 7th Division's Kookaburra & Boomerang device though. Although classified as light tanks these carried considerably thicker armour than the Vickers VIb's in use by the Commonwealth forces in Syria & were eagerly pressed into service.

Next up a 2 pounder AT gun: 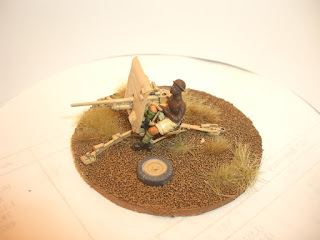 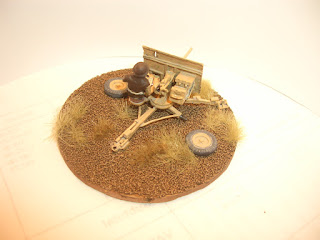 As you can see still a work in progress, these are often seen portee'd on various trucks because the carriages had a habit of falling apart over too much rough terrain.
Posted by Handgrenadealien at 08:29 3 comments:

The last of my Claymore Castings Men at Arms painted in the livery of the various Earls of Orkney: 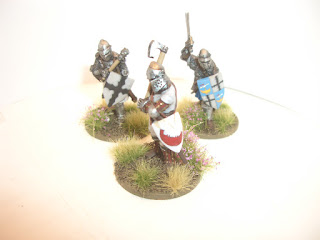 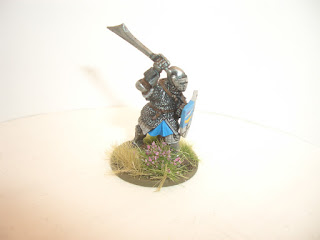 Enjoyed painting these before the festive season descended upon us, but not had chance to photograph them until now. Merry Christmas all & a happy new year.

Posted by Handgrenadealien at 12:03 2 comments:

Still making steady progress with my (not so) recent purchase from Claymore Castings. In order to have a change from painting Lymphads on a yellow background I have skipped a little further east into the Earldom of Mar for this weeks offering: 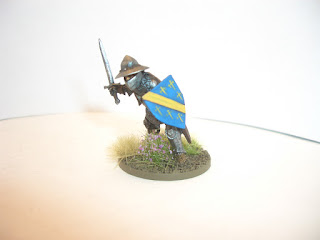 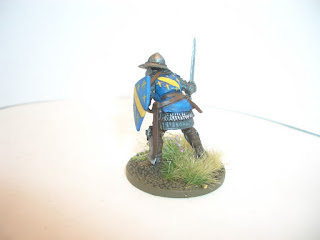 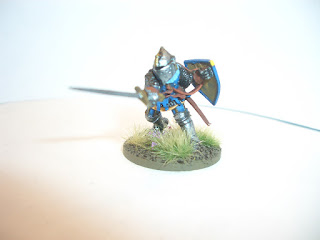 I have no idea if the Mormaers of Mar ever allied themselves with the Lords of the Isles, but to be honest Scottish warfare & internal politics in the 14th/ 15th centuries is so incredibly byzantine anything is possible.
Final offering this week is another Macdonald retainer, in yellow. 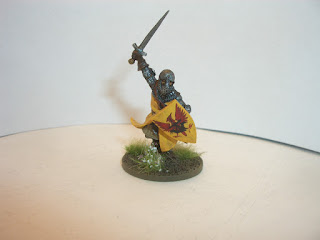 Posted by Handgrenadealien at 11:51 3 comments:

A bit more progress this week on my burgeoning Isleman army for Lion Rampant. 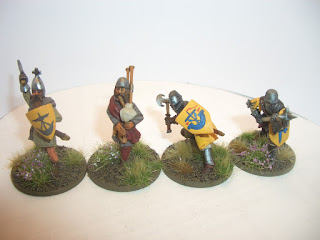 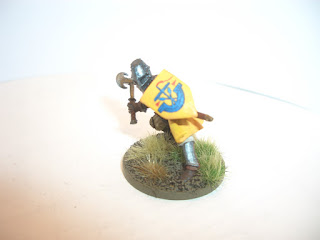 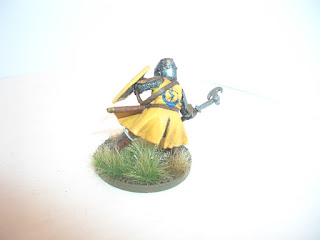 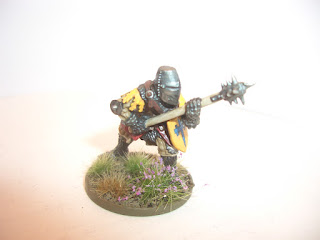 Really happy with how this project is shaping up. I wasn't too sure about painting heraldry by hand but for a small project like this it is manageable. Not sure I would want to tackle it on a grand scale though.
Posted by Handgrenadealien at 03:06 1 comment:

Rumours Of My Demise Have Been Greatly Exaggerated.

Its been a while now since my last post here & longer still since I actually laid brush to miniature. The reasons for this are long & somewhat tedious to relate but briefly come down to a lack of enthusiasm for wargaming in general & a renewal of interest in roleplaying; GMing is a very time consuming business.

Anyway with the lengthening evenings of Autumn upon us I laid out some hard earned cash to complete the Lion Rampant army I started back in 2014: 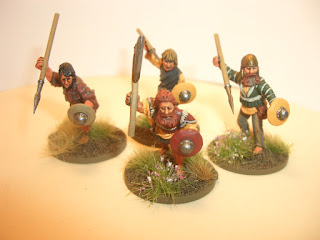 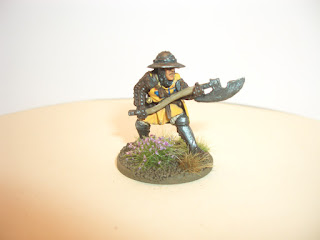 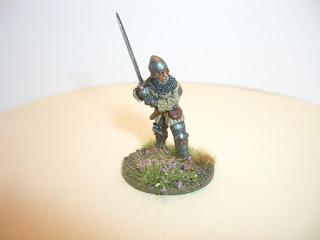 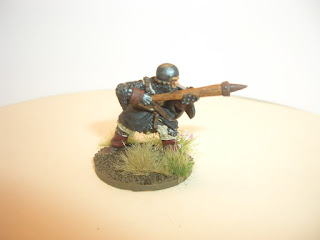 For those of you unfamiliar with it, painting Heraldry is a Royal pain in the arse; but not nearly so bad as applying transfers, a Dantesque torture in my book.
Almost as bad is researching West Highland heraldry, there are a few common elements scattered through it ( Ship, Eagle Rampant, Red Salmon, Red Hand) but these can be put together with a bewildering randomness, where they are recorded at all. Quartering arms! what a good idea, lets dispense with the expensive business of marrying then including the wife's heraldry on our kit, lets just bung a bunch of stuff on there in the first place.
You could look at this two ways I suppose, on one hand it gives you carte blanche as a painter to well, make it up; but that deprives one of the enjoyment of researching a subject & thus expanding your knowledge which is the approach I like to take. Could be why it takes me so long to finish projects, thank god for the internet, there's always some one out there who's beaten you to it; try typing in West Highland Heraldry, you'll be amazed.
Posted by Handgrenadealien at 04:20 3 comments:

A Small Corner of Palestine.

Have been suffering from burn-out in the miniature painting department since May, it will pass eventually, more than likely when I find something to inspire me sufficiently. In the meantime I have updated one of my old Panion boards for use in a planned game of Chain of Command, being as this is a skirmish game I have cluttered things up a bit to reduce sight lines. 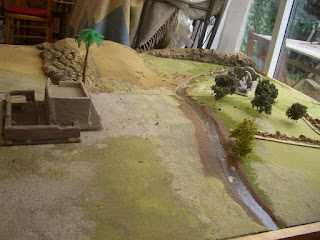 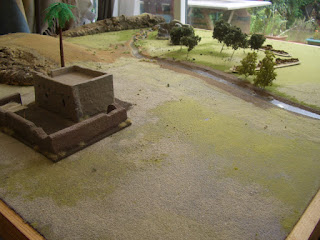 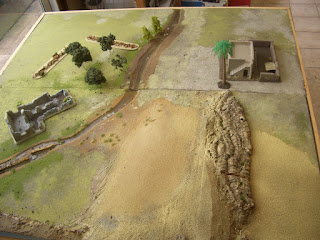 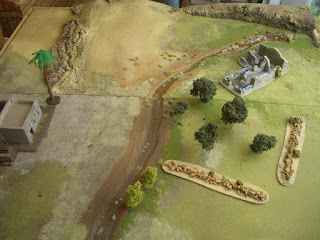 I intend to add some scrub to the hillside prior to gaming & have some more wall sections ( in reality no more than stones cleared from fields & stacked round the margins) in production so nearly there, just need to set a date to game now.

Handgrenadealien
A pathological tree feller and habitual workaholic with an unhealthy compulsion to drink red wine and write errant nonsense about themselves online. Regular player of tabletop wargames: mainly against Mr. P. Ireland, a similarly inclined gentleman who disdains the competitive atmosphere engendered by most wargames clubs. As a result we constitute the smallest Salopian Wargames club where we recreate battles from history in an unseemly environment of mirth & merriment. Wassail!